We were used to hard work, my wife and I.

We were married while clawing out good grades for our undergrad degrees, working part time at menial jobs and studying in bed after frugal meals to avoid heating the whole apartment to save money so we could avoid being the poster couple for starving student matrimony.  Our early life together was not in destitution, but we could see it from from our bedroom window.

After college, my new bride started law school and I dug into serious work with aggressive day and night teaching jobs, trying to pull us up a bit higher on the net-worth scale.  We managed to keep our Sunday’s for church and and somehow, through all our scrambling, managed not to have children – shocking – yes, I know.

One day, years later, I walked out of an IBM office in Austin, Texas with a huge contract for developing and teaching an important course using a teaching method I’d developed and had something of a reputation from. They were thrilled with the result and we were thrilled with their money.  About this time, my wife finished law school and got the job that made us official DINKs (Dual Income, No Kids), leaving us able to see how we might soon be able to own a real home.

With all this money, we had enough for a down payment of our first home, some nice new furniture, our own washing machine and dryer.

I needed time to convince myself that having kids was for me and I thought I could get my fill of them just by working with children at church.  Instead, I fell in love with them and soon realized that I wanted, even needed, some of my own. At the tender age of 37, it was time for me, us really,  to slow down and plan how to use the room across from our bedroom for something other than unopened moving boxes.

We traded away a large 300 gallon fish tank and start trolling department stores for baby furniture. We read the books, took the classes and even volunteered to work in our church nursery to get some hands-on experience with babies,  but somehow the impact and magic of the whole event still surprised us.  I thought I already knew what it was like to love a child.

Thus began the greatest adventure of our lives.

The nine months from the initial alert that our zygote had landed to that amazing rushed visit to the hospital to secure the release of our little guy from the temporary shelter of my wife’s womb, felt like only moments. All of a sudden, I found myself holding our baby, standing near the foot of our bed where my wife was bundled up and sleeping soundly after one of the most bizarre medical dramas I’d ever seen. Now I know that, even a relatively simple delivery is both a fear and joy ridden, breath-taking piece of magic. I had decided that I would be at my wife’s side every moment and, if possible, be the first non-mom person to touch our baby.

The delivery turned into an unexpected (and unwelcomed) difficult 30+ hour labor.  A complication concern cancelled my hope of being the first to hold him, but the concern proved to be moot so after the OB doctor, baby doctor and a delivery nurse, I was  the fourth to hold him. A single overnight in the hospital left both wife and son ready for our short drive home. 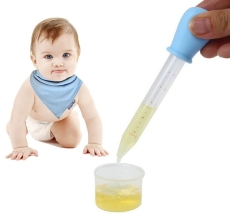 As if to underscore that unexpected surprises were in store, the first breast feeding did not go well.  Seriously?  I thought babies, and boys in particular, would arrive knowing how to nurse correctly, but no, both mom and baby were tired and getting frustrated as the milk got everywhere except where it was needed.  As mom’s tension and baby screaming increased, dad finally decided that this was not working so I came up with the alternative of having mom “express” (what a weird use for that word – right?) or pump her milk, while I calmed our little guy with a new baby medication eye dropper.  This made it easy to drop small amounts of the yellowish milky stuff straight into his mouth and he quickly realized that this was what he REALLY – REALLY wanted and thus I had his full and anxious hand-waving madly cooperation.

Both mom and dad understood that this first milk was of particular value because that yellowish tint was a natural brew called colostrum. Babies need it to better develop the ability to fight infections. His crying and fussing had been stressing mom partially because we were loosing some of this extra valuable (and irreplaceable) first-milk, but as soon as he was happily getting it via the breast pump and eye dropper, she was able to relax, turning the moment into a great opportunity for a much needed mom-nap.

I was so very glad the book had warned me about the color of the colostrum-laced milk  because, wow, that brew did not look like normal and I would have been tempted to dump and re-pump, you know, until the pipes cleared of whatever that yellow brew was.  Come on ladies.  I can sense your cringing from here, but this is how a guy’s mind works.

So, there I stood.  Our first crisis was over and the house was quietly dimming with the setting sun.  Mom was exhausted from the labor of labor and now the normal post-partum stuff was happening. She more than deserved several hours of undisturbed  sleep.

Our baby boy could learn how to correctly use her breast later when he wasn’t so urgently hungry and upset.

Clad in my most worn-out and comfy sweats, I too, was tired, but wisely did not mention it.  I was also running on adrenaline from the excitement of, poof – just like that, I’m a father.  I stood there for a few minutes to enjoy the moment.  Our baby boy was healthy and peaceful in my arms leaving me to think about how to start getting to know this little guy.

My first step, fully on my own, was to make him the victim of my first real attempt at ‘swaddling’, and guys, you need to know this, a few short lengths of duct tape help but do not let your wife see it. Swaddling, is simply tying a baby’s arms down with a blanket (like a baby burrito) to remind him of the comfort and security of the womb, otherwise new babies are likely to freak out over the unfamiliar ability to spread their arms and legs and so they scream in terror.  Once they are tied down, then give them something safe to suck on and life is good. Odd, but true.

Now that everyone was calm, new dad and first born were left to entertain ourselves for a few hours. Come’on kiddo!  Let’s do this!

His eyes were bright and suspicious, but I knew I had him at a disadvantage.  He was only hours old and the book said he couldn’t even see clearly yet. He really had no clue who or what I was.  I could tell him anything without pushback.  Such power. . . now long lost. . .

I also knew he was coming months ago and had been preparing while he was completely focused on producing and ordering the cells of his tiny body all in complete womb-darkness mind you.  At that point,  the simplest of mistake would multiply millions of times resulting in the miss-arrangement of limbs or vital organs.  This is why every mom counts tiny fingers and toes of every child.  They are hard wired to worry that something might be wrong.  But our doctor had proclaimed that he was perfectly healthy, nice job by the way kid.  Everything was in the right place and working as designed.

I had already determined that I was going to be a big part of this parenting thing and knew that sometimes, my wife would need me to take over for her.  Now was my first solo flight.  She had expressed milk for him. If he got hungry, I was armed and knew the eye dropper trick.

I did one final check on my wife.  She was out solid.  Wow – she went from giving me groggy advice to deep REM in less than 2 minutes.  I smiled.  She’s safe now.

My baby – our – baby, was perfect.  He was too new to life outside the womb to make any sense of it, so I told him, “let’s just take this easy”.

It was mid February, so a warm night was not going to happen, but the weather was mild, no wind, clear skies and warm enough for a few more hours.  Our back deck was close to the bedroom window so I could hear mom if she stirred.  We curled up with a blanket in a comfy deck chair, no lights other than the slowly emerging stars and street lights from the city downhill from us. Oh and yes, he had his neat little hospital baby beanie on his head and his eyes were taking it all in – at least whatever he was able to see.

The view from our deck commanded a wide angle that included almost the full final approach of aircraft for San Francisco’s SFO airport.  From here we frequently could count 8 or even 10 jets queued up and dropping slowly toward the runway.

“Okay you.  I’m your dad and am thrilled to have you here finally.  Let’s get acquainted.  What to you know about jets?  Oh, okay. Here’s what I know.”

In the following years that little guy was joined by one sister and one brother.  They have all grown up to somehow be among the best reasons for me to exist.

That I’m proud of them does not even begin to describe how they have out-shined all of my previous adventures and left me with my most urgent task – raising them without breaking anything.

The end result, despite myself, is three young adults who are making the world a better place.  Can I take my nap now?

11 thoughts on “Welcoming Our First Born”