“Okay. You’re ready. Keep that part of the rope in your hand and hold it tight against this part of the rope – well above your rig.  Spread your legs, lean slightly back against the rope, gently feed the rope through the rig and back up to the edge. Perfect. The next step will be the hardest, but take it as slow as you want.  It will be much easier once you’re over the edge and then it will be pure fun the rest of the way down.”

She moved back towards the edge. “Damn – this is scary”.

“You’re doing great.  Okay, stop right there and let me make sure Joseph is ready.”  Holding another rope, I stepped to the edge and yelled down to verify that he was set.

Her deep brown eyes locked on mine and told me exactly what she was feeling; I’m both on the edge of this cliff and the edge of sheer panic.  “You don’t have to do this you know.”

She glanced backwards into the open space, down to the forest canopy maybe seventy feet below her.  She looked back at me and I could see the resolve return to her eyes. “No – no.  I want to do this and I can do this.  You were right though. Going over the edge is freaking me out.  I want to scream and run, but you made it look easy, so I’m going to do this.”

Not long after my audacious birthday gift stunt (see that story here) my best friend from trade school, Joseph and his girl friend were talking to one of her girl friends about this guy who enjoyed doing crazy things and enjoyed life to the fullest.  I would have disputed some of their claims, but I wasn’t there and by the time I heard anything about it, Joseph and his girl friend had me paired up with this great little Filipino gal named, Elaine Peters.  They were all still living in San Francisco but I had moved to San Jose to be within easy commute to my first real job in the computer industry, so it took some planning to get all of us together.

Joseph arranged a few dinners which turned into double dates and soon we were two couples out for some fun times together.  They had an agenda that I didn’t see at the time which involved getting me talking about the various passions I had for having fun.  Very high on my list at the time (late 1975) was rappelling down steep slopes, cliffs and the walls of vertical caves.  I described how I had purchased all the rope and gear needed for myself and a partner.  It must have inspired Elaine because suddenly she leaned toward me and asks if I can teach her how to do it. 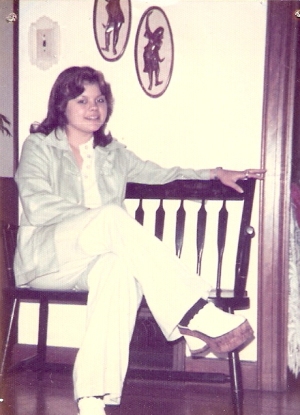 She had these fun and extremely compelling eyes.  I was quick to learn when she wanted to do something, It was best to either help her or get out of her way.  I chose to make sure she had a good and safe time going over the edge of one of my favorite cliffs and here’s how it turned out.

She and Joseph arrived at my apartment early that Saturday morning with her decked out in an old pair of bib overalls and warm shirts because the weather looked like it might get moist.

Soon enough, we were up the mountain and in the parking lot for Castle Rock State Park.  After a short hike and climb to the top, we had the ropes laid out and she was standing with her back to the edge, facing me and controlling the gear herself.  With only one small scream, she was over the edge and comfortably suspended against the face of the cliff doing exactly as I had told her.  She was also safe because if anything went wrong, Joseph was belaying and knew how to stop her from moving down the rope if needed. 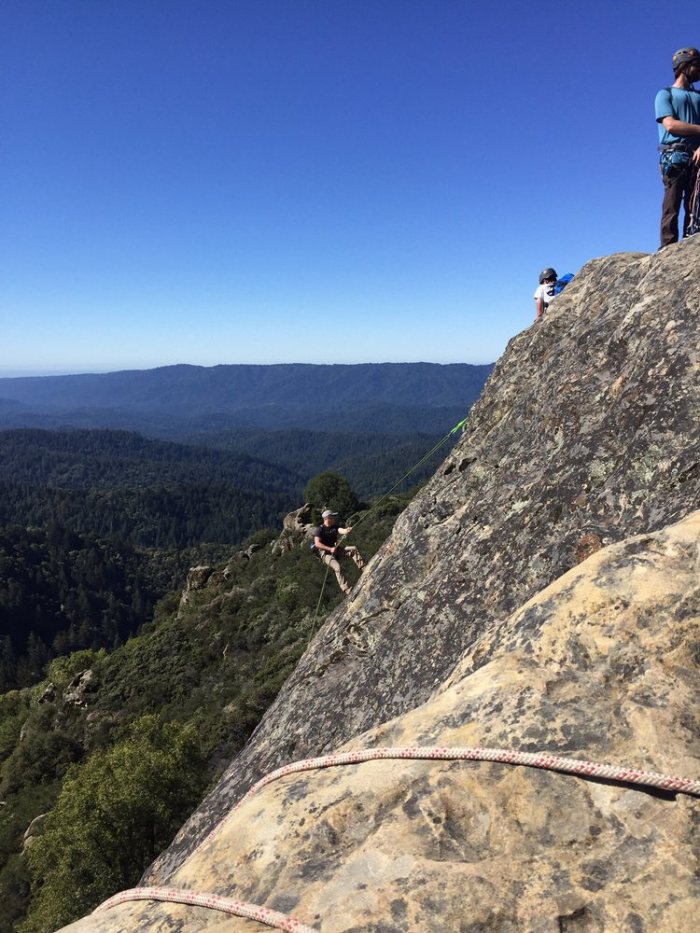 She looked up at me as she slipped over the edge.  I watched the panic quickly drain away and her huge smile return.  She was loving this.

We didn’t have a photo of the exact spot she went down, but this photo is pretty close.  What an amazing view and place to rappel!

“Keep your legs spread against the rocks so you don’t loose your balance and smash into the cliff face.”  She glanced up and smiled as she got comfortable balancing against the rock wall rather than a floor.  “Very good. Now ease up and the rope and let your body weight pull the rope through the rig slowly but keep your feet against the wall.”

She fumbled with this step as her butt dropped below her feet. But on a first trip down the side of a cliff with only an unfamiliar rope keeping you from falling; everyone struggles at this point when learning how to rappel. Nothing about it feels rational.  Your inner ear will protest and scream at you about loosing your balance.

She caught on and eased herself down the rock wall.  I watched her from above until I was sure she made it to a small ledge where she could sorta stand.  “Okay.  Tighten up on the rope and lock yourself in place.  Stay right there until I come around to the bottom.”

I dashed down the trail to take over for Joseph . “Okay Elaine.  You’re doing great so we’re going to try that emergency stop I told you about.”  Whenever you’re ready, let go of everything and just fall backwards.”

So picture this.  You’re a city person, rarely exposed to this much outdoors oxygen and this is your first time on the edge of a cliff with a guy you mostly trust but really haven’t known for very long.  Getting down as far as you have already has your heart pounding and your inner ear wondering what in the world you’re doing.  Now you’re supposed to fling yourself back into the void, let go of everything and trust that guy way down on the ground and his gear to keep you from dying. 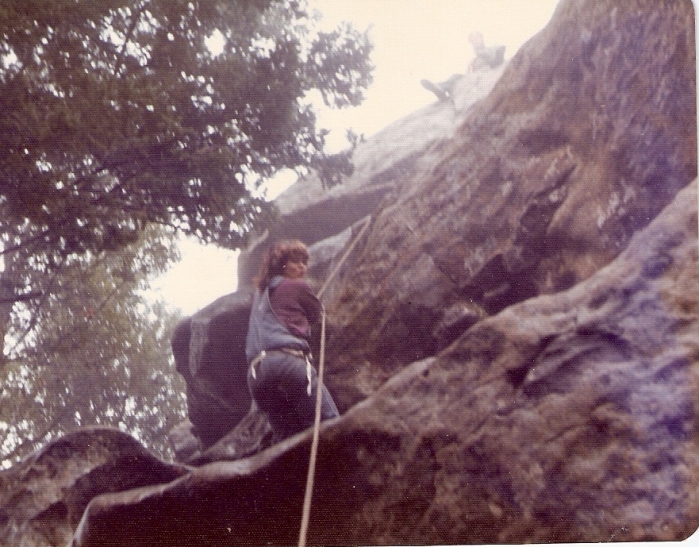 I would have paused if it had been me and Elaine did, but only long enough to steel her resolve once again and take a deep breath.  I could see her face enough to see that she was frightened but determined to get the full thrill of this experience.  She turned back to the rock face and simultaneously let go of the rope with both hands, just like she had  lost consciousness, flung herself backwards and (my favorite part) screamed like she was falling to her death.

Wow!  There she goes…

I immediately did my part to belay her by leaning hard on the rope.  The addition of my weight below the rappelling rig stopped the rope from passing though the rig so she fell no more than 4 feet but when she stopped, she was hanging from the harness around her waist.  Her version of this exercise was a spectacular upside down wild spider spread that Joseph caught a photo of.

Yea! Now this is how you show a gal a great time!

I lowered her slowly to the ground where she laid for a few moments trying to catch her breath and her composure – but her smile – it took over her whole face.  It, was, PRICELESS !  Elaine looked wonderful draped in trail dust and adrenalin trimmed with victory.

We took a lunch break and Elaine decided her memory of the day was great but incomplete.   Now she wanted to complete the experience by climbing back up, a much more demanding task.

“Okay then, let’s do this.”  I switched out her descending gear with climbing gear.

Cavers can’t count on having a climbable wall so we used a type of gear called “ascenders”.  Mine were called Gibbs Ascenders, that allow you to use the strength of your legs to climb the rope.  They work great, but can be a challenge when you have to navigate where the rope passes over edges.

After demonstrating  how to do it, I got her all strapped in and explained how it all worked.  In short, when you raised a leg, it makes slack in the strap to one of the ascenders.  The climber pushes the ascender up the rope then putting weight on it locked it in position so the climber can stand on that ascender while lifting their other leg and repeating the process until you make it to the top.

Elaine was tired, but still flying high on her success coming down.  I tried to tell her that going back up was less of a thrill and a lot more work, but wisely did not try to talk her out of trying.  One more check of her knots and gear and, “off with you then”.

She started well because it was just rope hanging over a high lip.  But quickly she arrived at that lip and climbing over it proved to be more than she could handle and soon I realized she was in trouble and was not going to be able sort it out.

I free climbed to where she was stuck and pulled her to safety.  Fortunately I was just able to reach her from that lip and found that she’d caught a glove in one of the ascenders.  You can see how bunched up they were in the photo.

Once back on the ground, she was finally tired enough to admit that this part had beaten her and she was ready to call it a day.

Years later, long after we set our relationship aside, I was talking with Joseph by phone and asked how Elaine was doing.  “She was such fun and I hope life turned out great for her”.

“Gary, she had lupus.  She had it when you two were dating.”

“She made us promise not to tell you.  She didn’t want anyone pitying or babying her because of her disease.  She knew her time was short and she wanted to grab as much of life as she could while she could.  You helped her do that.  She talked about that day we took her rappelling for years”.

I’m still trying to figure out how I feel about this.  I get not wanting to be babied for something like this, and just wanting to have as normal a life as possible, but wasn’t this the kind of thing a boyfriend should know?

Joseph told me, “I guess she didn’t want you to worry about loving someone who already knew she was dying.  She wanted to enjoy your time together without her disease being part of the picture.”

Would I have been a good boyfriend if I’d known this?  I was pretty young and dumb.  I do wish that someone would have told me when she passed.  I had to settle with writing her folks a belated condolences letter.  Despite how long ago it was for them. I had to let them know what an amazing lady she was and how much a I valued having known her.

RIP Elaine Peters – you are still missed and fondly remembered.

13 thoughts on “Helping Her Reach Higher”