It was a glorious 1969 summer day at the Petaluma Fair with my friends.  We had made our way to the Round Up ride as pictured above). This ride was loads of fun, but on this day, I found a serious flaw.

We loaded up and into our slots and buckled up.  The floor began a slow spin that increased until we were well pressed against the wall.  The spinning platform then tilted up, as shown, and lifted us almost to a 70 degree angle – what a rush!

The tilt reversed and we began our descent.  If you look closely, you’ll note that a few of the rider slots were next to one of two big gaps.  I was in one of those slots.  I was goofing around and had lifted my feet up to the hand railing directly in front of me.

As the tilt came down,  it was time to get my feet back under me but I underestimated and my left foot momentarily swung OUTSIDE the inner wall – out where no body parts belong. On the downward rotation it was too hard to pull my foot back in – and the non-moving hand rail used to board the ride met my fast moving foot right below the ankle.  Look at the photo and you’ll see a version of that rail.

On the upward swing, I was able to pull my foot back in, verify that it was still attached but understood immediately that my day at the fair was over.

With the assistance of my friends I was able to get down those stairs and hop over to where I recalled seeing a first aid station.  The ambulance arrived and thus I got my first ride in one, off to Hillcrest Hospital where the mandatory x-rays were taken and I was pronounced, injured but no bones broken (Amazing!) and grounded for about 3 weeks with that foot raised so healing could happen.

My mom knew well how to keep me sitting still and made a quick trip to the book store where she loaded me up with anything that she thought I’d enjoy.  One of those books was was George R. Stewart’s (GRS) Earth Abides, first published in 1949, but my mom had found it in a 1969 paperback with a cool cover that suggested some kind of science fiction was inside.  It was so much more than either of us guessed.

I am a chronic reader.  Hard science fiction is my favorite genre, but left with nothing else, I’d read the backs of cereal boxes and irremovable pillow tags just to maintain the stream of written words slushing through my brain.

I feel in love with this book and began sharing it with both High School and Church friends.  In our local library, I found Mr. Stewart had written several other books, and with the assistance of local book stores, I’d become a collector.  He did not publish hundreds of books, but he was thought to be fairly prolific and I soon began claiming that I had the most complete collection of his works in the whole state based on my thorough research at the Petaluma Library card catalog.  The internet was not yet invented, so I thought my claim was fairly safe.

Several of my friends became hooked with me on his works and we formed our own ad-hoc book club well before book clubs were a thing.

Flash forward now to 1974.  By this time I never – ever passed a used book store (or any book stores actually) without stopping to check their holdings of George R. Stewart titles and adding to my collection as opportunity and money permitted.  On several occasions I spent my lunch or tuition money on books.  My mom decided that if I was hooked on books, there was a low limit to how much trouble I could get into, so she was an easy mark for money to buy a title if I was low on funds that week.

One day, I found a really old used book store, just west of Union Square in San Francisco and this place could have been a book addict’s dream store.  Uneven shelves, with dusty, poorly sorted titles, so only the owner and his staff could dependably find anything,  leaving grazers like me to wander up and down the creaky stairs to small balconies and nooks just to see what treasures we could find. I was this close to Heaven and not even dead yet. 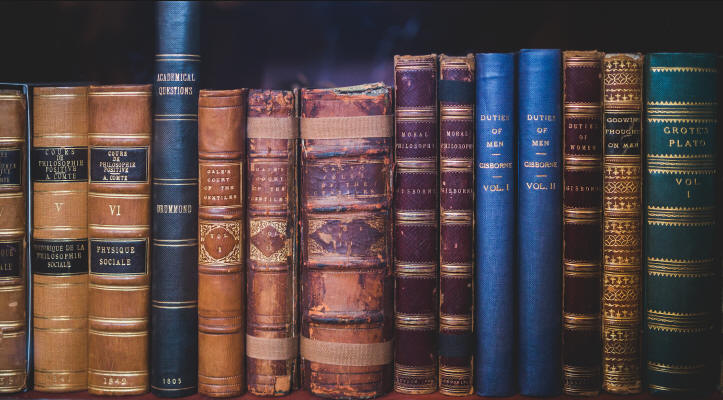 A dusty, mouse of a clerk with wire-rim glasses asked if he could help. I asked about his stock of GRS works, and he put his hands together and answered, “Certainly sir. Please follow me.”  I wondered how long it took him to develop his old book seller presence.  He had it nailed.

He led me to a dimly-lit chamber and rolled an ancient shelf ladder aside to reveal – “YES” about 2 feet of used GRS books, several that I didn’t (but was about to) own.  I’d have to spend some of my tuition money, but mom would understand.  I thanked him and asked if I could study the collection.  He closed his eyes, put his hands together, nodded and toddled off.

I had selected two volumes from the shelf when a much older and shorter version of the used book clerk found me.  He was even more iconic a book clerk than the younger guy – bent and bearded. This guy looked even more “used” than many of his books as he asked if he could be of assistance. “Yes, I’m interested in works by George R. Stewart.  I’ll be buying these two, but had hoped to see rarer works.”

“Ah,” he responded. “You are a student of Mr. Stewart then?”

He leaned in to whisper, “Then I should show you what I have in my office.” 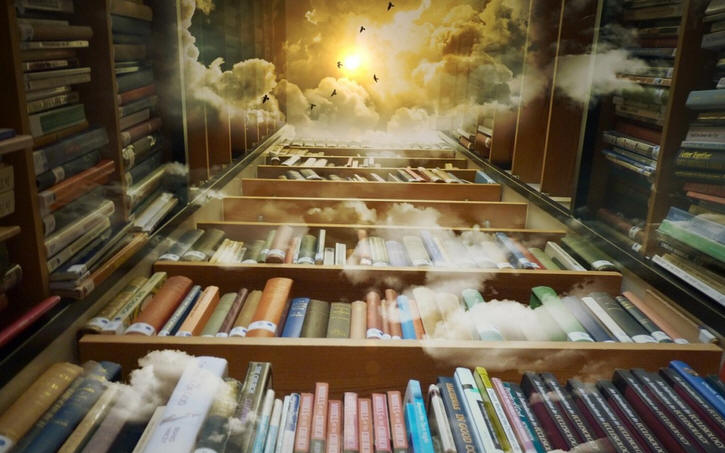 He took me to an amazing room with shelves and ladders that went up at least six stories all full of volumes that looked like they belonged in a museum.

He led me through stacks of Paul-the-apostle-era volumes to a raised section that he had to use the shelf ladder to reach.  The shelf was right at my eye level and looking at the shelf, I noticed a large title I’d only heard of via a library card catalog.  I pulled the book out and found, not only was it the rare title, but it was also a first edition.  I had to have it!

”Oh no my boy.  Nothing back here ia for sale.”

He began his descent and the ladder creaked like it was going to collapse. I was thinking of how I might befriend this guy, so he would let me borrow that book or read it here.

“I suspect I have a disappointed you. I’m unwilling to sell that book.  Would you forgive me if I could arrange for you to meet Mr. Stewart?”

“You, you know Mr. Stewart?” I was, not sure I believed him.

“Certainly,” he answered – noting that I was now gripped with hope.  “He’s retired now and living about a mile up Geary Street.”  He handing me a blank card and instructed me to, “write your name and phone number and I will see what I can do.”

I was almost afraid to get my hopes up.  I had been a fan for several years now and GRS had become larger than life.  My friends and I had wrapped a high school ecology presentation around “Earth Abides”.  We talked about the iconic hammer from the story and whether events depicted really would have happened.  We must have spent hundreds of hours discussing “Earth Abides” alone.

We had read “Fire”, “Storm”, and “Sheep Rock” at length and discussed their ecological and social issues.  Each were fictional but rooted in some physical force or place with rich histories or implications to consider.

I also took on his ”Ordeal by Hunger,” the definitive historical fictional account of the Donner Party and their nearly starving to death up near the present Lake Donner near lade Tahoe. The tale of how these immigrants got caught in a terrible snow storm near what is now Donner Pass and resorted to cannibalism to survive still sends shivers.

Well, the bookstore owner kept his word and in a few days, I had a letter from GRS waiting for me when I got home.  Now – my hopes were up – up high.

I wrote him back and a date was set.  I took a bus up Geary a day in advance to know where I was going but he lived in a retirement fortress, a guarded, towering, gated community of condos so there would be no getting in until tomorrow.

I had a slew of questions to ask, things I wanted to know about where he got such unique story inspiration and details of certain story scenes.

When he and his wife opened the door to me– all my prep came unwound and I fell from a well-read literary fan to a nearly mindless groupie.  I managed to get the basics out like: why I loved his books and what I’d read and who I’d shared them with and how popular they were in our group and blaa-blaa.  My latent shy personality had resurfaced at this worse possible moment and I feared wasting this meeting, but could not correct the failing trajectory I was in.

The Stewart’s were very cordial.  Looking back, I’m sure they sensed my awe and stepped up to make sure the meeting went well.

We talked about very general things related to his work for and then, when I failed to keep up my side of the conversation, he started filling in the gaps of things I might find interesting.

He succeeded.  It was all interesting.  He had photos of the places where his fictional stories took place, and fascinating details that I failed to ask about.

But the best thing was when he asked, “Mr. Wilson, can I show you something I think you would enjoy?”

“Of course,” I answered. He turned to his desk and opened a drawer for me to look into and there it was – the rustic, beat up single-jack 4 pound hammer from “Earth Abides”.  I already knew every detail of the artifact, but seeing it in real life, holding it and hearing the story of how he integrated it into the story were worth all the embarrassment I felt for nearly wasting such an opportunity. I know this hammer, I thought.  It feels just like the one Earth Abides left in my mind.  I was a sated fan.

The final treat was when about week afterward, a package arrived.  Inside, I found 2 books Mr. Stewart had published, bearing titles I’d never heard of. How was that possible? But here they are.  Both were signed – making them instant collectors items that I’ll only part with via my will.

Did you ever get the chance to meet your favorite author?  Hopefully you managed it better than I did and I hope your writer was a great a person as George R. Stewart was for me.

Fire: Event fiction with a forest fire as the main character

Storm: Event fiction with a devastating storm as the main character

Ordeal by Hunger: the Story of the Donner Party – a must read for California history

Yes, you should read them all.

7 thoughts on “The Favorite Author Incident”