I awoke very early and listened carefully.  Was anyone awake?  It was early Saturday morning, early fall and suddenly I could hear the furnace firing up, a sharp, small but clear explosion followed by the spinning up of the blower before settling down to only a quiet background hum, but no evidence of human consciousness.   I was so young, I did not understand this thing capable of filling the house with hot air, but I was curious about it or anything else out there in the dark.

We had been in this house for only 3 of my 5 years and it was just Mom, Dad, and my newly minted sister (who I was not yet sure we should be keeping) and me.  Keenly listening for anyone else, I pushed back my covers and crept into the night.  Another adventure of exploring the darkened home awaited, calling gently for my prompt attention.

Even at this age, I was already aware that new discoveries and true or false principals were things of interest and should be proven and memorized.

Don’t laugh, but I well recall one day when, as a soaking wet child, fresh from the shower and having forgotten to grab a towel, I dripped my way to the hall linen closet and saw my favorite towel back behind a stack of wash cloths and reached in to grab it.  While pulling it out, I dragged my arm across the wash cloths and was surprised to discover that my arm was dry. I paused to contemplate what happened.  With a drip puddle forming around my feet, I arranged my data, my arm is dry wherever I touched the wash cloths.  Ah!, (I thought) wash cloths have value beyond being used with a bar of soap in the shower or bath tub.  They can also drying things!  I compared the newly damp wash cloth to my towel and -who knew!?  I proudly thought out my conclusion. They must be made of the same stuff. Wash cloths are just teeny-tiny towels.

Mom was not pleased later when she discovered a badly folded, fairly damp towel in the linen closet and most of the wash cloths missing only to be located in my hamper soaking wet for having been re-tasked as small towels for my whole-body dry-off experiment, which I’m proud to say, worked.  “Okay – okay Mom.  I won’t do it again. . . ” How could she not see how important this discovery was?  Perhaps, next time, I’ll use one wash cloth to mob up that water trail I left from shower to closet to my room.  She could have noticed the puddle in front of the closet door. I’ll bet that was how she knew it was me.

I have few memories from this age but this one remains as real today as any other.   I could not have explained it at the time, but I was driven to explore things on the edge of where familiarity became fear.  For a 5 year old, the home I knew only by day, was now nearly pitch black, would suffice.  With no flashlight or night lights in use, and only ambient light from a partial moon coming in through the closed drapes, my home had become a place I did not know.  So I spent perhaps an hour in my PJs exploring darkened corners away from the large living room window, trying to be as silent as possible until I found something worth finding. 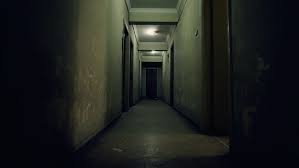 The game was still new when I discovered that something.  This morning, I had grabbed a small blanket as a cape for warmth as the heater was beginning its cycle to push back the cool fall air.  I had made my way down the darkened hall that my imagination has elongated and creep-ified with squeaky floor boards that I had almost mastered but not quite perfected where to step so no creaking sound would give me away.  I had verified that all was well in the entry and behind the kitchen door.  The dining and living rooms were too well lit to be exciting but I checked them anyway which brought me full circle back to – the hallway.  I knew better than to prowl through my parents room and the room that contained my probationary sister was best left  undisturbed.  Prowling back to my own room would completely defeat the game so I turned to consider my options.

As I pulled the blanket cape closer around my neck, the heater vent made its presence know with a quiet blast of wonderfully warm air.  There was a large TV cabinet about 6 inches from the heater wall vent and this become one of my first brainstorms.

I could sit with my back to the TV cabinet and hold the edges of the blanket down with my arm and toes to make a near-perfect seal around the heater vent with just my head sticking out of – YES – my own personal sauna.  Thus began a near-daily ritual that lasted well through the arrival of even a second sister and the first who tried, but usually failed to get up before me to claim this one perfect spot for enjoying that heater vent.

Later, when I was tall enough, I made my parents nuts by snuggling down with that vent until the thermostat toggled the heater to “off”.  But I knew I could stand up, wrap the blanket around me and sneak around the corner and down the hall a few steps to the thermostat control and reach up to nudge the setting a bit higher so the heater would bounce right back on.

By the time I had every room in the house smoldering in the mid 80 degrees Fahrenheit, one of my parents would wake up, drenched in sweat and realize that I was again trying again to drive them from the house with a near run-away heater setting and come out to break the magic and comfort of sleeping curled up with that vent.  I was normally nearly comatose and on the edge of heatstroke myself by this time.

One of them would correct the setting of the the thermostat, gather me and my blanket up and carry me back to my room – again.  I would be only distantly aware of being moved and later woke up, safely in my own bed, with a normal body temperature and wondering if it had all really happened.

It must have because I knew that  I knew something about that furnace and how to focus its power into creating a private luxurious sauna.  I must be a genius because only a genius could have discovered something this great.

9 thoughts on “The Invention of the Sauna”

Follow Gary A Wilson Stories on WordPress.com
Join 189 other followers